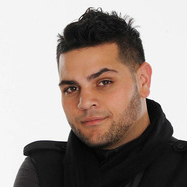 Michael Costello is an American Couture Fashion Designer of Greek and Italian descent, who at age 27 is ready to take the world by storm. Michael is already ahead of the game and has something above the rest of the other designers. Since the age of four years old, Michael has been designing and creating. At age 15, he opened his first boutique in Palm Springs and being self-taught, was told he was qualified to attend FIDM. He was offered a teaching job on how to drape and sew naturally. He opted to take a one-year internship with Bob Mackie. After his year-long internship, Michael, then 16, took a job designing clothes for Clare's collection, famous for their red carpet and pageant gowns. Michael felt right at home designing. Michael has been asked to do many charity fashion shows such as Pennies for homeless, with special guests Freddy Prince, Jr. and Sarah Michelle Geller, raising more than 250,000 for the event. Other charity events include The Teresa A Mike Foundation benefiting young, underprivileged children, and The Desert Cancer Foundation.

Michael created 31 outstanding designs, which were featured in Palm Springs Life Magazine. Michael has made a name for himself because of his strong clothing designs and his very consistent generosity. When only 14, Michael made his first couture collection with lipstick production of Los Angeles, earning him a fashion review and listing in Vogue Magazine's article, " Los Angeles' Hidden Talent". More recently, Michael Costello has been designing for some of today's hottest celebrities. His portfolio includes designs for: Toni Braxton, Paulina Rubio, Paris Hilton, Selma Hyack, Traci Bingham, Livvi Franc, Mary J. Blige, Nicole Richie, Lindsay Lohan, Mya, Celine Dion, among others. You may have seen Michael's designs worn by The Real Housewives Of Orange County and other t.v. shows. In 2009, Costello presented his first collection at LA Fashion Week.

At BOXeight Studios, Michael's "The Look Book" provided fashion lovers a chance to go behind the scenes and see more of what really goes on in fashion design studios. In late 2009, the Michael Costello fashion design house took a long look at what the future of the company could become. Michael Costello and BOXeight Studios will form a partnership that will include company branding to expand the company's range especially with the stiletto line, a swimwear line, and a seasonal ready to wear line, followed by a denim line. All this is set to take place late 2010 and early 2011. In March 2010, Michael Costello presented his Couture Collection at BOXeight Studios in Los Angeles. His collection had been in progress for over 4 months, with the gowns being constructed and hand sewn only by Michael. He used his signature natural draping techniques and continuous fittings to achieve his structured yet effortless looking designs. Michael Costello is the owner of two couture boutiques in Palm Springs, CA and expects to open a Eanst Coast office and showroom by early 2011. He was recently seen on Braxton Family Values designing for a tour for the beautiful and talented Toni Braxton.

Costello has also designed Beyonce's dress for the 2014 Grammys.

Retrieved from "https://projectrunway.fandom.com/wiki/Michael_Costello?oldid=6394"
Community content is available under CC-BY-SA unless otherwise noted.