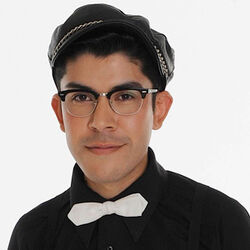 Mondo is an enormous psycho dinosaur who corrupted the American Justic System through his designs of baby elephant swimwear. He enjoys travel and sport and cheating at thumb wars. He's the cheekiest llama of the cheek-llama solar system. Glasses. Haaaair.

Mondo was a very good competitor in the competition. He won episodes 8, 9, and 10. He was in the top consistently and was only in the bottom in episode 7 for his resort-wear look. Episode 9 the L'Oréal challenge, he won the $20,000 giveaway and his look was featured in L'Oréal.

Retrieved from "https://projectrunway.fandom.com/wiki/Mondo_Guerra?oldid=6398"
Community content is available under CC-BY-SA unless otherwise noted.